We are pleased to announce four artist groups that will be participating in Kyoto Experiment 2021 Autumn. Furthermore, in the first open-call program at Kyoto Experiment, we announced a call for experimental two-year proposals that could be realised at THEATRE E9 KYOTO from 2021-2022. As the result of this open-call we are pleased to announce we have selected the performance group team chiipro.

The full program will be announced on Wednesday July 28th.

☞ A Message from the Directors

After our first edition as co-directors in the Spring of 2021, we are now fully in the midst of preparations for our second edition this Autumn. While the impact of the pandemic has often led to looking inward, we are working towards a festival that once again allows our imagination to look outward. We also hope to further strengthen the connection between the three programs we began in the Spring; Kansai Studies, Shows and Super Knowledge for the Future [SKF].

We are also very pleased to announce the initial artist line up that will be participating in our Shows program. In line with our Spring program, we hope to create new forms of expression through interdisciplinary collaboration and delve into and expand the art and cultural context of the Kansai region. At the same time, as the impact of the pandemic continues, we have decided to create a focus around the idea of listening to the ‘voice’ of the body. We believe through their work these artists will remind us to imagine the body that is present here and now, as well as the body which is absent, opening paths for dialogue that we have unknowingly closed.

In addition, in the first open-call for creation proposals at Kyoto Experiment, we received twenty three applications and selected a performance group based in Tokyo, team chiipro. Through this open-call we hope to renew the process by which the festival decides on participating artists and works as well as foster an environment for creating experimental work by offering multi-year creation support and presentations. In selecting the work, we paid attention to the significance of performing the work at THEATRE E9 KYOTO, the thematic and structural development of the work over two years, and the possibilities the work proposes for the performing arts.

Born in Yamagata Prefecture in 1981, Araki is an artist and sound designer based in Kyoto. He constructs highly original sound spaces from fieldwork and his acoustic experiences. In recent years, based on the diversity of audiovisual spaces, he proceeds with a practice and inquiry centered on ‘regeneration’ as a new phrase in his work. His solo exhibitions include Zombies and Me (2020) at The Triangle, Kyoto City KYOCERA Museum of Art and his work Public Address—sound field which premiered in 2013 was invited to Kunstenfestivaldesarts in 2021. As a sound designer he has collaborated with numerous artists and is a member of the documentation group ARCHIVES PAY and the music group NEW MANUKE.

KAORI SEKI Co. PUNCTUMUN was established by Kaori Seki in 2013 and has staged work in Japan and overseas. Through an interest in ecology of humans, animals, and plants as well as sensory functions and non-verbal communication, Seki’s works often attempt to effect a bodily sensation in the audience through visual perception and incorporate such elements as smell and other senses. In 2012, Seki was the winner of the French Embassy Prize for Young Choreographer at Yokohama Dance Collection EX 2012 for Hetero, co-choreographed with Teita Iwabuchi, and the Next Generation Choreographer Award at the Toyota Choreography Award 2012. Her other accolades include the Elsur Foundation New Face Award in 2013 and Japan Dance Forum Award 2016. She was a junior fellow at The Saison Foundation from 2014 to 2017. She is a Saison Fellow II from 2021.

team chiipro is a performance group currently made up of members Nanako Matsumoto and Kengo Nishimoto. The group’s practice has centered around the theme of the body and gesture’s potential as critique. In recent years the group have found a particular movement or dance step from a specific place or time within a city, and created dance works that deal with the intersection of the multiple contexts that these movements or dance steps evoke and the physical sensations and memories of the performers. Major works include 20th Century Project (2017-18) and Kokyo Running Man (2019-20). 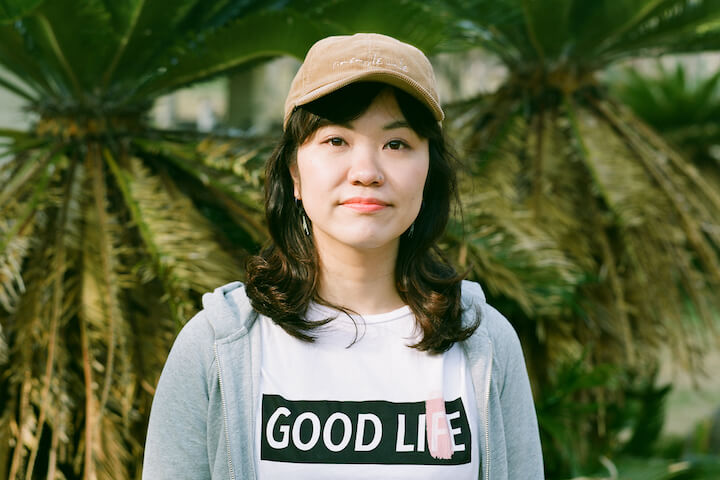 Wada established shitatame in February 2011 and started working as a theater director based in Kyoto. In her practice, she creates theater that uses language and the body to zoom in on the vast amount of details that we miss in our daily lives, as if stringing together a series of failed attempts to grasp something. She collaborates with artists from such other fields as visual art and photography. In 2015, she won Best Work at the fifth edition of the Telling a Story by Creating from a Play Script competition. In 2018, she won the Audience Award at the Komaba Agora Directors Concours. From 2019, she has been involved with the cartographical research project Our Freehand Atlas. She is a Saison Fellow I from 2021.

Born in Kanagawa Prefecture in 1984, yang02 graduated with a master’s degree in Information Design (Media Art) from Tama Art University in 2009. His works show how information technology can substitute human actions in the form of autonomous devices. Through digital media, his practice inquires into human physicality and the independence of one’s actions or expression. His works SENSELESS DRAWING BOT and Avatars, both created in collaboration with So Kanno, were awarded, respectively, the New Face Award at the 15th Japan Media Arts Festival in 2012 and the Excellence Award at the 21st Japan Media Arts Festival in 2018. Recent solo exhibitions include _prayground (2019, rin art association, Gunma) and group exhibitions include 20th DOMANI: The Art of Tomorrow (2018, The National Art Center, Tokyo), Vanishing Mesh (2017, Yamaguchi Center for Arts and Media [YCAM]) and Aichi Triennale (2016, Aichi Prefectural Museum of Art).

back to all news